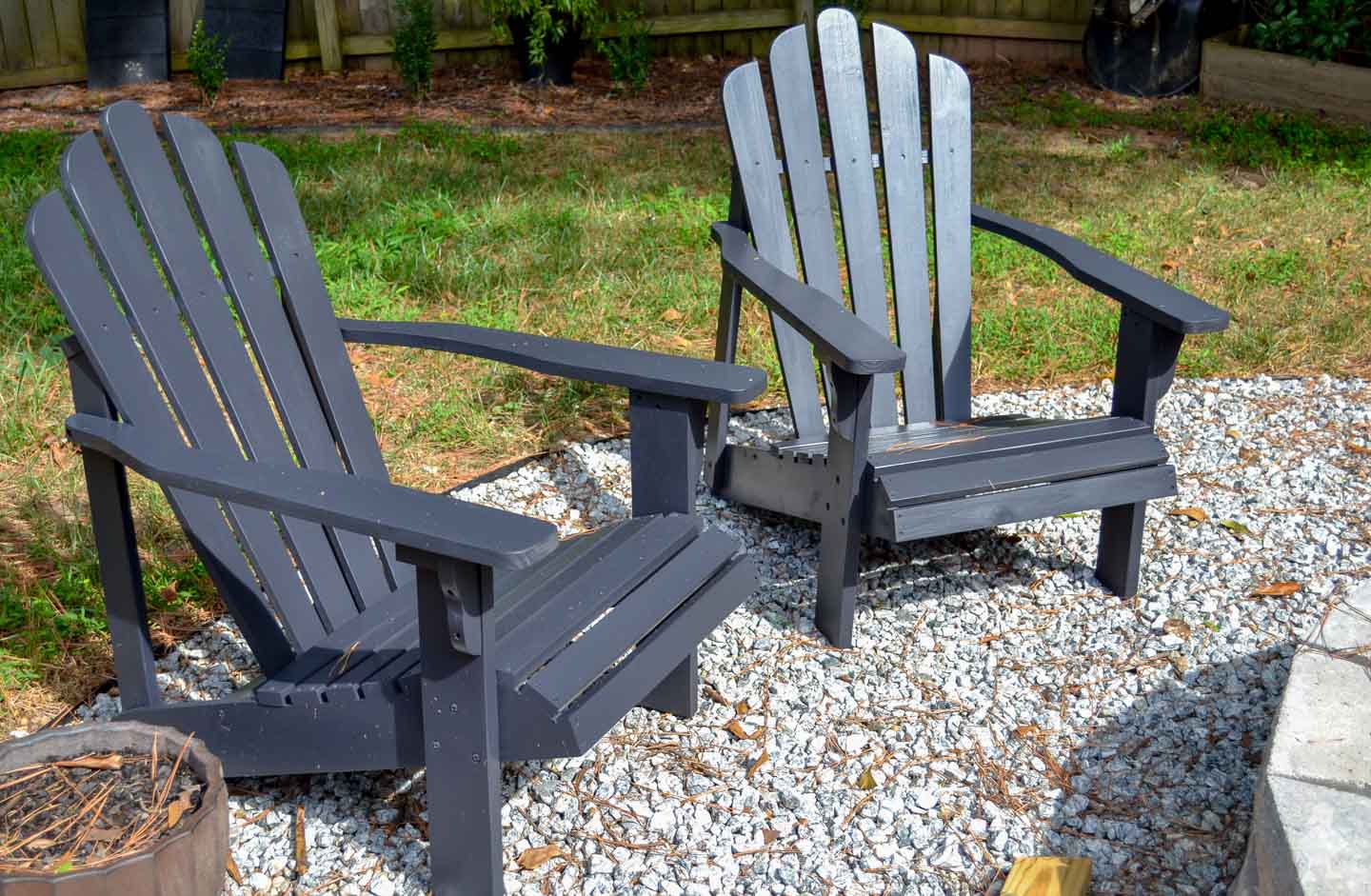 Since the new floating deck is now built, I’ve been trying to get its furniture, decor, etc. all figured out. And now that fall is approaching, I thought it best to go ahead and get some new landscaping into the ground and rooted so that it’s ready for spring.

In case you missed it, I figured out my color scheme and possible decor for the deck, which I shared with you guys here. It’s mainly a scheme of black and white with touches of blue and lots of pattern.

Part of that new color scheme included updating my old Adirondack chairs (you might recall me staining them a couple of years ago — here are some tips on that). They’ve since gotten a little weathering and needed to be cleaned up, so I first tried using some spray paint to change them to black.

Then, I borrowed a paint sprayer from my pal Erin to paint the shed, and things sort of snowballed. First, the company who sent her the paint sprayer saw my post about borrowing it, so they (very generously) sent me one as well, along with a couple of spray shelters to keep me from spraying the rest of the yard. Which, let’s face it, was a smart move on their part, since I give very few effs about overspray. But this household has more than just me in it these days, and the bearded guy is very dedicated to his grass-growing project. So, thanks to them, I basically kept myself out of trouble by not completely trashing the entire yard. ?

Anyway, my point is, with this new tool in hand, I suddenly wanted to spray all the things. I bought a gallon of a custom mixed black paint (Tricorn Black by SW, but color matched to exterior Behr paint) instead of “spray paint black”. Then, I made up my mind that all the furniture and accent pieces I build into the yard should be this color. I plan to build a sectional for the deck later on (probably start next month, maybe?) and that will be black, too. I whipped through each area yesterday in preparation to share this on Instagram, so even though these aren’t beautiful “after” photos (I’ll take some later after mulching is done), it still gives you lots of updates!

Originally, I had two Adirondack chairs around the fire pit. But after last winter and inviting friends over, I knew I needed a few more. So, I got two new ones assembled and painted them this past weekend. I took the original two and re-painted them the new black color, too. I know — after I’d just spray painted them with spray paint.

I decided to repaint because:

Economically-speaking, my dollar would stretch further than buying all those cans of spray paint to paint the same amount of stuff. Which leads me to…

I’m sure that I’ll get some safety-related questions on this, so I’m going to first put up the disclaimer that it’s recommended that you not put “anything combustible” near a grill for at least 10 feet. Got it? You make your own choices here, people. But my patio doesn’t even extend out from my house by 10 feet, and I’m not putting the grill in the dirt. After a summer of seeing the ugly propane tank from the front side next to the deck, I decided to do something about it.

My solution was to build myself a little screen to run parallel to the grill. It’s mounted on two metal rods that screw into the back and were then hammered into the ground. There’s a good amount of space between it and the grill usually, but it doesn’t really look like it from this photo because the grill cover is on and we were moving things around while putting it in place.

I chose to paint it with some high-heat paint (the same as you would use to paint a grill) and then cover over the front-facing side with the same black paint color as I’m using in the rest of the yard. This way, my propane tank isn’t as much of an eyesore when the grill is in use. I love it!

The scrap wood bench got the same treatment as the first two Adirondack chairs: spray paint, then painted over with the new color. I want to eventually build about 4 more of these to go in between each of the Adirondack chairs since they can be both a table surface and extra seating when needed.

I went looking for a few square planters for some string light poles (you may have already seen a few tutorials like this out there, and my own tutorial is coming, since I chose not to use wood posts). The main goal is to find some planters, add some concrete and gravel to the base and center a pole in the middle, then string lights at the top and add flowers in the planter. When I went shopping for the right look, the planters I wanted were over $100 each. Oof, not a chance!. So, I took some scrap plywood from the shed project and started making boxes. Then, I added horizontal pieces of 1×4 on top to create a modern look to them. Then, I caulked and painted them.

They aren’t perfect by any means — that plywood is warped in places, so I didn’t give the 1x4s the effort they deserved to smooth the corners and make them look pristine (didn’t bother mitering, didn’t sand or fill nail holes, didn’t really try to disguise bad cuts, etc.). I’ll create plans for them, but trust me: the plans will be a lot better than how these turned out, because I totally half-assed this build! Still, they were way cheaper than buying, and if they last a year or two, maybe I’ll put some work into sprucing up the corners. For now, they are functional and no one but me will be paying attention to their flaws.

The deck now has flowers and shrubs! My mom and sister came over this weekend (Mom on Saturday, Em on Sunday) and we tore through a bunch of my backyard cleanup tasks. It’s really the only way I was able to get so much done. Mom cleared out the overgrown plants in the vegetable garden and helped me build some of the planters, while Emily went H.A.M. on all of the weeds and tried out all my new STIHL battery-powered tools. She also took off all the spent flowers from my hydrangeas (some are even re-blooming thanks in part to that!). Em also helped me dig new holes for all nine of the new shrubs surrounding the deck.

There’s a set of steps on one side (and leads right to the fire pit so it creates flow), but all the other sides of the deck will have landscaping. The reason is mainly that after we build the sectional, we won’t really have access to step up and down these areas because they’ll be blocked by furniture. So, it’s the perfect opportunity to add some color.

I bought Sedum ‘Autumn Fire’ Stonecrop (which blooms in rose-pink clumps and then fades to a really pretty soft green/pink like you see here) and Powis Castle Artemisia, which is a beautiful dusty silver-green color.

As you can probably see, these plants are pretty small and haven’t grown into their full size. Once they do, I’ll probably add more varieties (likely purpley-pink hues, which I think will play off the blue hydrangeas well) for a neat and tidy garden area.

One plant I haven’t bought yet is the one that will go right in the corner near the new grill screen; I’m thinking something with purple leaves. I’ve gotten a number of suggestions already (like Smoke Vush — which I think might be too big, so maybe a Dwarf Loropetalum?), but I’d love to hear your favorite purple-leafed shrubs!

For this, I’m using my favorite landscaping edging that I discovered a few years ago.

While it’s a little more $$ than the rubbery stuff you can dig down into the ground, I buy it for all of the combined features:

You might’ve noticed I haven’t quite finished the corner with the steps, and that’s because I’m still trying to figure out how I want to transition the mulch from around the deck to the fire pit that has crushed gravel. If you have a suggestion, I’m all ears!

So, in a nutshell, there are a bunch of new additions to the back yard this summer, and mulching is still on the to-do list. I also just started on the shed color, too! Once it’s done, I’ll share the full reveal first and work backwards on the step by step tutorials since there is SO much to cover there.

Got anything you would add? What purple-leafed shrub is the right one for the corner near the deck? Knowing what plants I already have around the deck and the rest of the yard, what flowers or plants would you put in the planters when they’re ready? 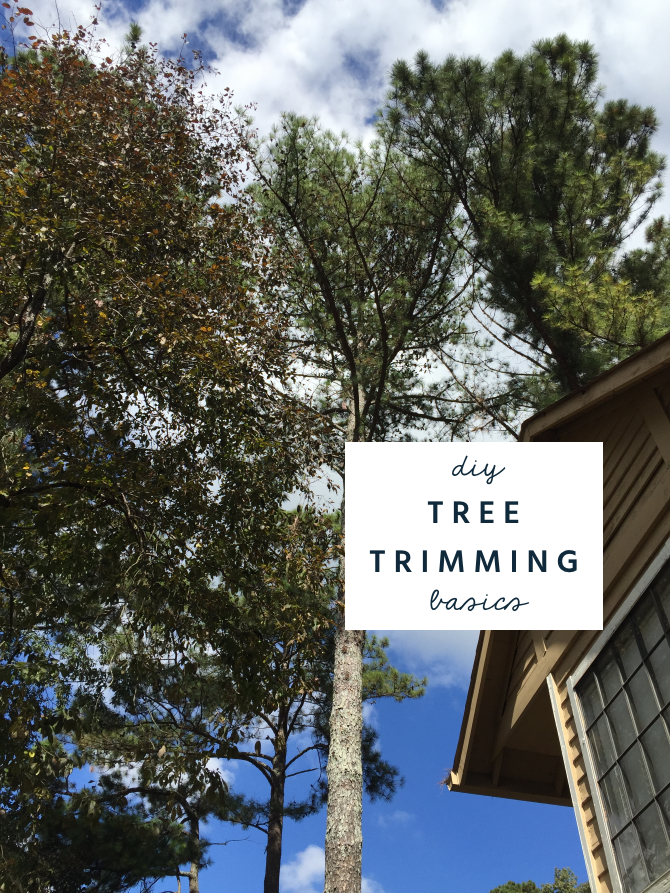 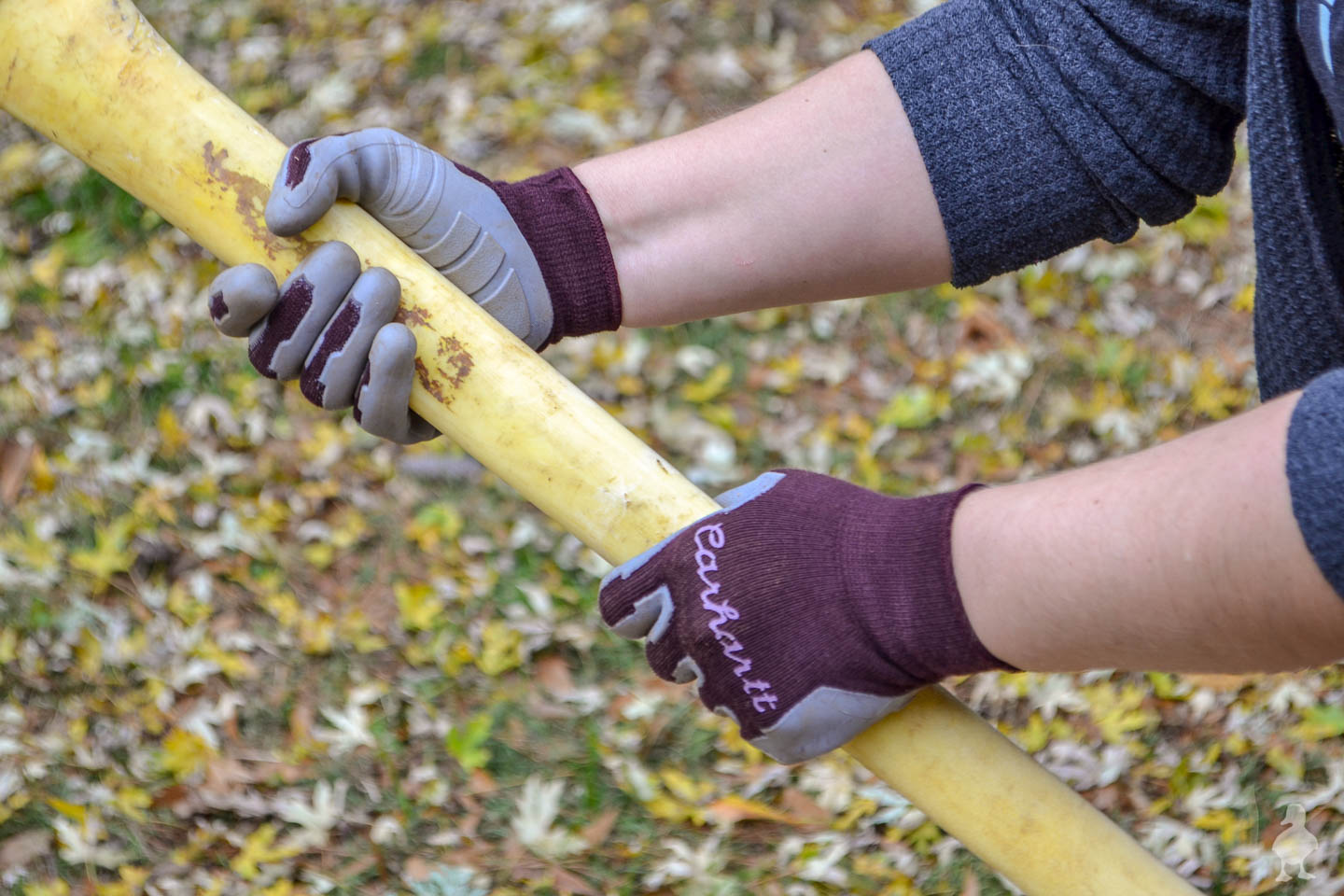